Ruminations on Rightsizing, Act I

In this first part of a series of pieces about Detroit’s evolving land use plans, I want to weigh in on the issue of population density.  Issues based on this simple metric are at the core of the reasons for, and objectives of, the city’s rightsizing debate.  Despite the significance of this measure, it seems to suffer from overuse and misuse by both advocates and detractors of rightsizing.

The Free Press’ famous “Comparing Detroit to three other major cities” map is one of the most effective, visually engaging and well-done maps I’ve seen.  No other map seems to have had such an effect on the rightsizing discourse.  The map's premise is mentioned in many articles about the city, including those by the Economist and Forbes. 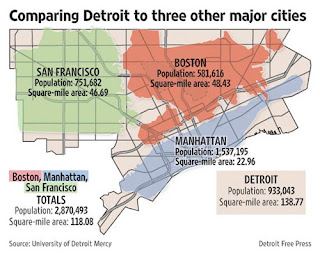 With that in mind, however, I think it might make unfair comparisons.  According to the 2010 census data, Detroit is still a relatively dense city.  Even after losing more than 200,000 residents since 2000, Detroit has greater population density than Denver, Sacramento, Portland, Las Vegas, Grand Rapids, Ann Arbor, Cincinnati, Dallas, Atlanta, Tampa, Austin, Boise, Des Moines, Orlando, Indianapolis, Louisville, Salt Lake City, Nashville, and Kansas City.  Among major American cities of its size or larger, Detroit is the seventh densest.


My other concern with the Boston, Detroit, Manhattan and San Francisco map is that Detroit has always had less population density than these other three cities.  This is not a new change.  The Free Press could have made the same map in 1950, and it would still make Detroit look comparatively empty.  Moreover, San Francisco, Manhattan, and Boston are three of the densest communities in the country.  Healthy communities such as Chicago, Philadelphia, Brooklyn, and Seattle look sparse in comparison.  Even Indianapolis, a growing Midwestern city, looks empty when compared to Detroit, Baltimore, and Miami. 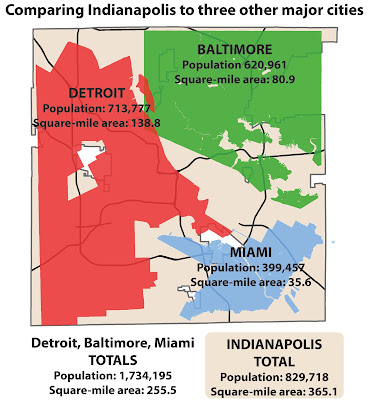 Using this technique, you can make many cities look highly vacant. 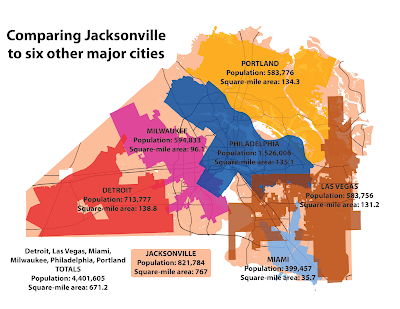 Urban observers who argue against Detroit’s rightsizing plans often use this high-density defense.  This view, however, is also problematic, as noted in Rethink Detroit.  This defense by density is misguided, because low population densities are only especially problematic – from a budget standpoint – when a city was built for a higher density.  Jacksonville and Indianapolis look vacant in the density comparison maps because many areas of those cities remain undeveloped.  The local governments haven’t installed infrastructure such as streets, streetlights, and sewers in these areas, so they’re inexpensive to maintain.
To accurately compare the relative density of cities, then, we should measure the amount of infrastructure per resident, in addition to the amount of area.
Of course, there are many ways to measure infrastructure.  Perhaps the most ubiquitous type of infrastructure, streets and highways, is the best single indicator.  By this measure, feet of street per resident – “FSR” – Detroit has a lower density than 9 of the 10 largest American cities.
When compared to the seven largest American cities, only Houston has more feet of street per resident.

If you assess neighborhoods by population density alone, many of the best neighborhoods in Detroit, such as Indian Village, Boston Edison, and Palmer Woods, seem relatively vacant because the homes are on larger lots.  By an infrastructure density assessment, however, these areas appear healthy, because the roads are further apart, as well.
While Detroit may appear rather stable through the lens of population density, the city’s FSR suggests another view.  Of the city’s 3,115.91 miles of streets and highways, 581 miles front vacant lots, according to Detroit Residential Parcel Survey data.  If you strung all of these lot-fronting roads together, they would stretch to Philadelphia, or to Chicago and back.  This is all infrastructure that must be maintained, salted, and policed.
According to the Detroit Residential Parcel Survey data, 10,683 of the city’s 32,913 blocks are comprised of at least 25% vacant lots. 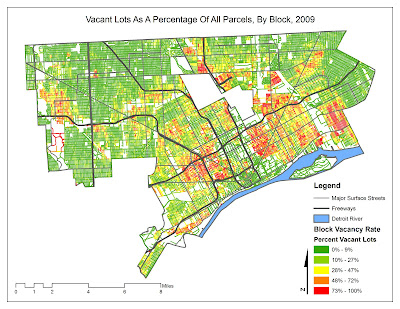 Of course, FSR is but one metric available to planners, and population density remains a highly effective tool.  Residents should use both population density and FSR in their land use decision-making processes.  While both tools have shortcomings, they are effective complements and paint a more complete picture when used in unison.
Posted by Robert Linn at 8:12 AM

Robert Linn
Detroit, Michigan, United States
I am a Detroit native and an urban planner in the city. I specialize in land use planning, economic development, and spatial and numeric data analysis. This blog stems from my love of my hometown and my interest in using maps to explore complex issues. If you have any questions or comments, send me an email at roblinn[at]gmail.com.